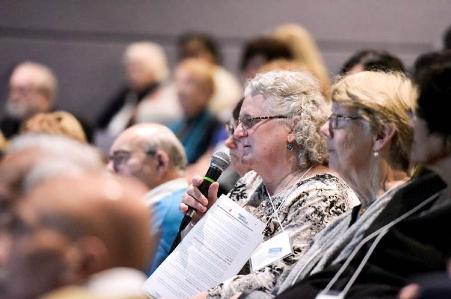 Photo taken at the BC Health Coalition Regional Gathering/Oct. 2017 Conference & AGM. Agnes Jackman, BC FORUM Regional Rep. for Vancouver speaking and to her right, Barb Mikulec, BC FORUM Board Member. 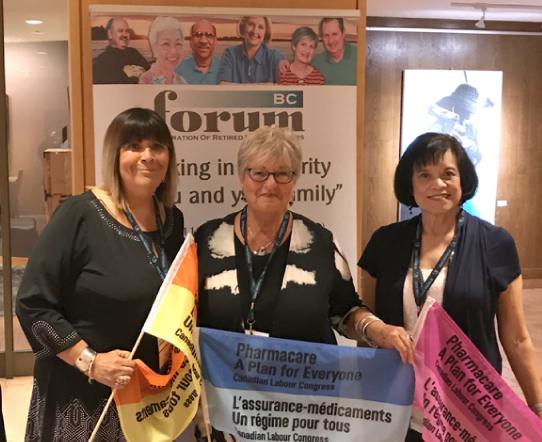 At the National Pensioners Federation Convention held Oct. 3-5 are BC FORUM Board member Barb Mikulec, 2nd from left, Diane Wood, President BC FORUM 3rd from left and Agnes Jackman, BC FORUM Regional Representative, Vancouver, on right.
Photo by Gudrun Langolf. 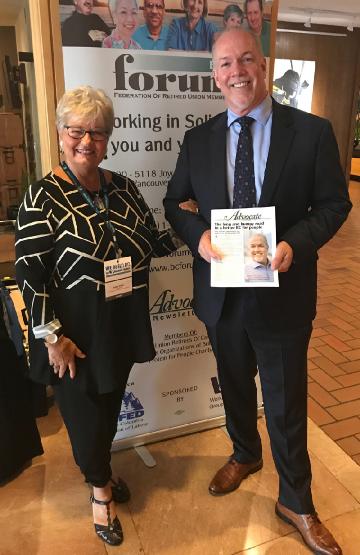 Diane Wood, President, BC FORUM with Premier John Horgan at the BC Building Trades Conference in Victoria in September. 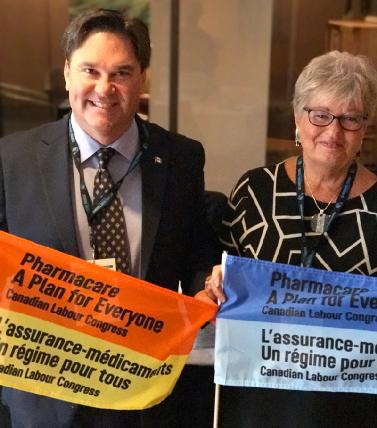 Don Davies, MP NDP Critic for Health and Vice-Chair House of Commons Standing Committee on Health with Diane Wood, President, BC FORUM at the BC Building Trades Conference in Victoria in September. 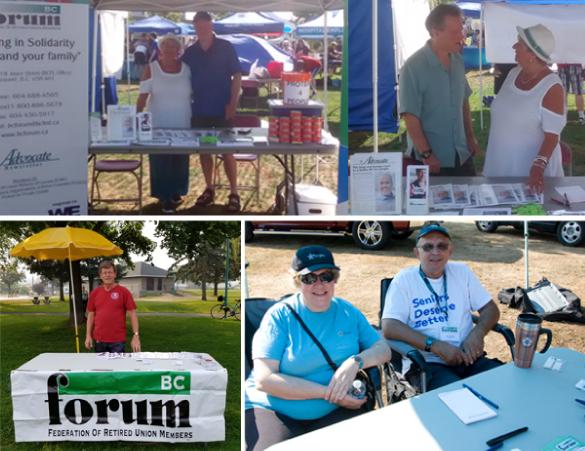 BC FORUM prominent at many Labour Day 2017 events! 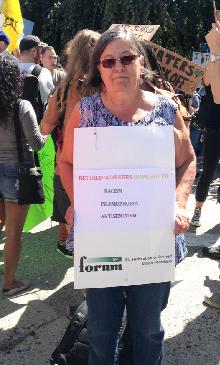 BC FORUM Regional Rep and delegate to the Vancouver & District Labour Council Sandy Bauer attended the anti-racism rally that took place in Vancouver in August. She commented about her rally sign in an email to BC FORUM, “I wanted to be more inclusive, hence ‘RETIRED WORKERS OPPOSED TO RACISM ISLAMOPHOBIA ANTISEMITISM’ in the colours of the Rainbow Flag.” 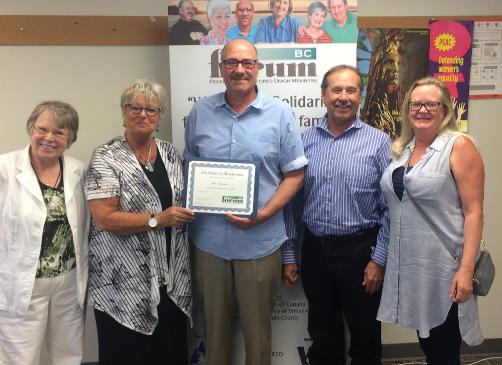 BC FORUM Life Membership was presented to Ken Georgetti, past President of the BC Federation of Labour & past Chairperson, BC FORUM, at the 2017 AGM. He is joined, from left, by Miriam Olney, Board Secretary; Diane Wood, President; Ken Georgetti; Dan Bradford, BC FORUM Treasurer; and, Sam Wiese, 2nd Vice President, BC FORUM.

July, 2017 - BC FORUM has sent letters to both CUPE 1816 and to Pacific Blue Cross in regards to the employer lock-out and ongoing labour dispute. 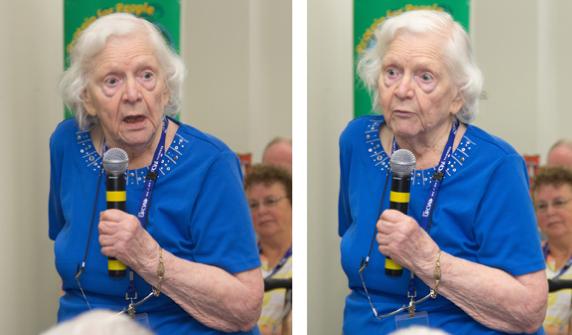 Alice West, past president of BC FORUM enthusiastically participates in the discussions
that took place at the AGM on June 21, 2017. 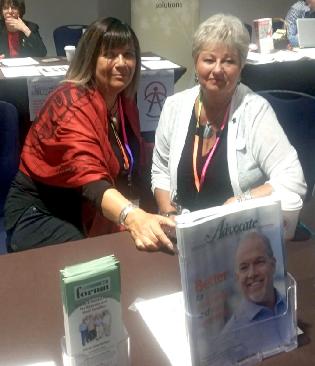 Holly Page, newly appointed BC FORUM Regional Representstive and BC FORUM
delegate to the Victoria Labour Council, visits with president Diane Wood at the BC FORUM booth at the BCGEU Convention, June, 2017. 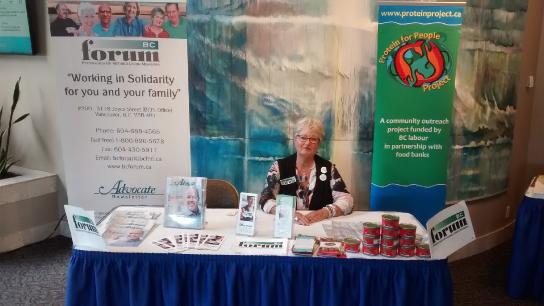 April, 2017 - BC FORUM president Diane Wood staffs the display booth
at the 2017 CUPE BC convention in Victoria.

April, 2017 - BC FORUM sends letter to BC Minister of Health seeking province
to cover costs for seniors’ shingles vaccine. 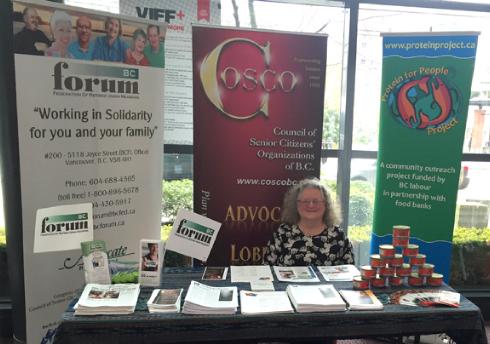 Sister Agnes Jackman, BC FORUM Regional Representative, staffs the display table at the JustFilm Festival 2017 Justice Bazaar at Vancity Theatre in Vancouver at the end of March.

At their March 2017 meeting, BC FORUM Executive Directors show their support for the BC Fed’s Better Can Happen Here, the HEU’s Care Can’t Wait and the BCGEU’s Seniors Deserve Better campaigns. 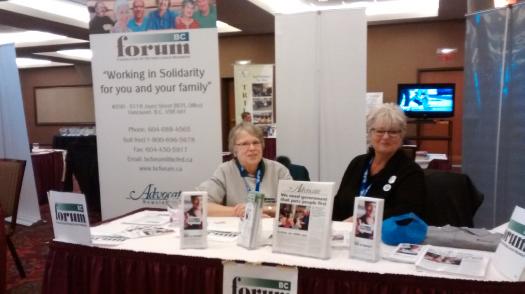 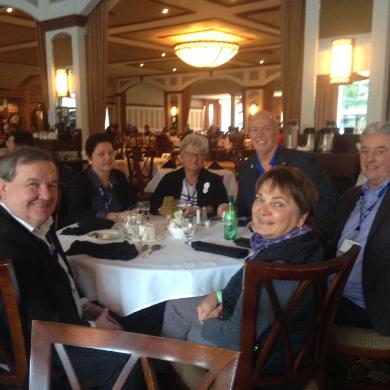 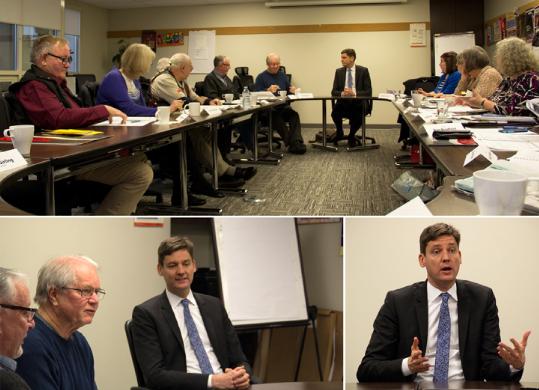 BC NDP MLA David Eby (Vancouver-Point Grey) attended the BC FORUM Board meeting on January 17, 2017. Photo by Soren Bech.